Famous for its relaxed atmosphere, Laos is one of Asia's most laidback and charming destinations. Visitors today encounter a simple society with a strong spiritual tradition where the stresses and strains of the modern world seem irrelevant. The country moves at a pace as languid as the Mekong River that flows through it. Towns are less hectic than elsewhere in Asia and the countryside is a combination of beauty and tranquility. Despite increased interest from the outside world, Laos still remains the undoubted undiscovered gem of Asia. The landlocked nation of a little over six million people exudes a delightful, almost other-worldly charm and reminds one of a simpler, easier time.

Come to Laos to experience the rolling mountains, remote villages, tribal crafts, the magic of the Mekong, to enjoy getting to know Laos' friendly and hospitable people, sample delicious Lao cuisine incorporating fresh local herbs and spices, and to embrace the country's slow and peaceful way of life. Open your heart, open your mind, and let the genuine faith and generous hospitality of Laos replenish your soul. 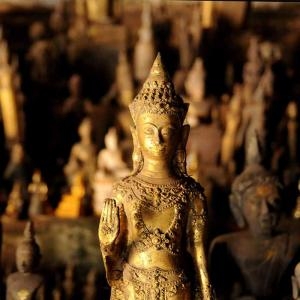 Luang Prabang Encounter
5 DAYS / 4 NIGHTS
On Request
From its welcoming people to fabulous architecture and delicious cuisine, the place is inviting and warming to all who visit
VIEW TOUR 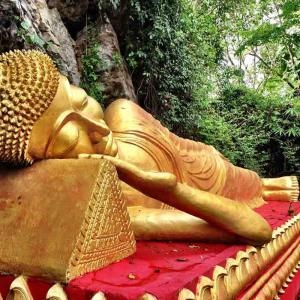 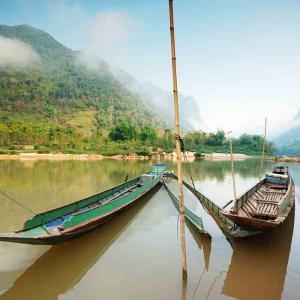 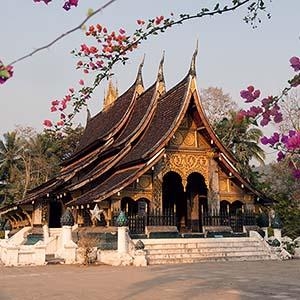 Luang Prabang on the Kids Path
6 DAYS / 5 NIGHTS
On Request
In Luang Prabang, families can marvel at the beautiful blend of French and Lao architecture and stop to join in a game of petanque with the friendly locals.
VIEW TOUR
TOP MUST-SEE DESTINATIONS:
1
Vientiane

Without doubt, Vientiane is one of Southeast Asia’s quietest capital cities with a recorded history that stretches back to around 1,000 AD. Hugging a wide bend of the Mekong River, it looks more like a rambling collection of villages, dotted with a few grandiose monuments, than the engine room of a nation. The capital city delivers a relaxing riverside break where one of the best things you can do is grab a drink and enjoy the sun’s spectacular show as it sets over the Mekong. Despite being the largest city in Laos and the hub of commerce and administration, Vientiane is still refreshingly laid back.

Located in Vientiane, Pha That Luang (“Great Stupa in Lao”) is Laos’ most incredible religious monuments. The stupa has several terraces with each level representing a different stage of Buddhist enlightenment. The lowest level represents the material world; the highest level represents the world of nothingness. Built in the 16th century on the ruins of a Khmer temple, this stupa battles centuries of destruction and rebuilding, and remains one of the most incredible and authentic examples of architecture.

The ancient town of Luang Prabang situated in northern Laos, was designated a UNESCO World Heritage Site in 1995. Considered by many travellers and writers as being the heart of Laotian culture, the tiny town is encircled by mountains and is 700 metres above sea level at the confluence of the Nam Khan and Mekong Rivers and is a destination of choice with its amalgamation of crumbling French architecture, glistening temples and extensive natural beauty. This former Royal capital still remains the main centre for Buddhist learning in Laos and is the perfect location for spiritual contemplation.

Kuang Si is regularly touted as one of the most beautiful waterfalls in the world, and has three tiers leading to a 50 kilometer drop into crystal pools of water. The water from the fall flows downstream, and can easily be reached by kayaking for those adventurous enough, and is close enough to Luang Prabang to make it a day trip. Plenty head here for swimming thanks to pristine water conditions, so come prepared with swimwear to jump in.

Known as the most beautiful landscape in Laos, Vang Vieng is a riverside town attracting millions of young travelers from all over the world. It’s no wonder, since its landscape of mountain peaks, waterfalls and caves woven into the seams of Nam Song River is picturesque, to put it lightly. Vang Vieng is home to cultural discovery and adventure travel, too, with a handful of temples to visit between trekking and rock climbing in limestone mountain formations.

Si Phan Don, or 4000 Islands, is a vast archipelago situated in the south end of Laos, located where the Mekong River flows through the Khone Waterfall before reaching the main river in Cambodia. Suggested by its name, Si Phan Don is home to countless of lush, all-but-deserted islands of varying sizes, each with incredible landscape that’s ripe for adventure travel. While in Si Phan Don, travelers here might catch a glimpse of the Irrawaddy dolphin, one of the most endangered and intriguing wildlife in Southeast Asia.

The Pak Ou Caves are located north of Luang Prabang on the Mekong river and can be reached by road or river boat. The caves are famous for their miniature Buddha sculptures. Hundreds of very small and mostly damaged wooden Buddhist figures are laid out over the wall shelves. They take many different arrangements, including meditation, teaching, peace, rain, and reclining (nirvana).

Situated in the heart of the golden triangle, Bokeo is just over the border from Chiang Rai province in Thailand and also borders Myanmar while China is less than 100km away. Bokeo Nature Reserve was created as a refuge for Laos’ wildlife that were threatened with extinction, or endangered by hunting and forest destruction. The best way to explore this protected area is with the Gibbon Experience Project, a conservation project launched after the discovery of the indigenous black-cheeked gibbon, one of Laos’ most endangered primate species. Hidden in the lush tropical forest, the project is a fascinating collection of tree houses and rope bridges woven through jungle brush, and boasts one of the best back-to-nature experiences in all of Southeast Asia. 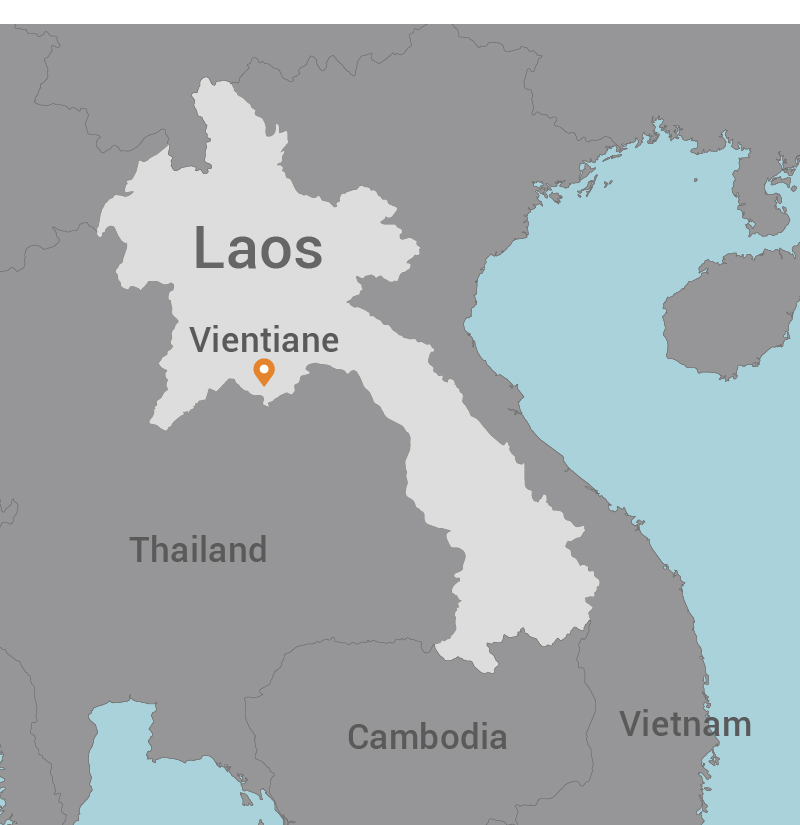 Laos' population has approximately 7 million (2016) inhabitants and consists of more than 100 different ethnic groups with most falling into three main categories: The Lao Loum who inhabit the lowlands, the semi-nomadic Lao Theung who live in the lower mountain ranges and the Lao Soung hill tribes originating from Burma, Tibet and southern China.

Laos is a great place to visit at any time of the year as the weather doesn't vary much.

Laos has a rich history stretching back 10,000 years. The population of Laos is made of up of more than 100 different ethnic groups, with each having their own distinct clothing, language, customs and way of life.

The national language is Lao, which is closely related to Thai and is spoken in many different dialects. French is still spoken by many educated members of the older generation but Thai and English are popular with younger people.

Laotian cuisine draws on culinary traditions from its neighboursbut Lao food lacks the variety that many of the cuisines from surrounding countries offer. Dishes are a blend of Thai, Vietnamese and Chinese in flavour and presentation. Traditionally, Lao food is very spicy – Lao people will often add chillies by the fistful and use heavy seasoning. Fish sauce is often used to flavour dishes.

Laos cerebrates many annual festivals called "Boun" in the Lao Language which are particularly enjoyable and beautiful, signifying traditional aspects of Lao lifestyle. Most festivals are connected with religion and the yearly rice farming cycle. The timing of the festivals is calculated according to the Buddhist lunar calendar, thus changing every year. Please check the latest information before visiting these events.

The official national currency in Laos is the Lao kip (K).

Laos has a very small air travel industry, but things are rapidly growing as more flights service an increasing number of towns across this country. The largest airport is outside of Vientiane, where a number of international flights arrive and depart to regional destinations around Indochina every day.

All visitors entering Laos must possess valid passports. Visas can obtained from Lao Embassies and Consulates abroad. In addition, visas can also be obtained on arrival at the international checkpoint.

Laos is an excellent destination for anyone interested in picking up elaborate handicrafts. Hill-tribe silks, arts, crafts, home-furnishings, jewellery and couture quality textiles dominate the market.

Laos has no facilities for major medical emergencies. The state-run hospitals and clinics are among the most basic in Southeast Asia in terms of the standards of hygiene, staff training, supplies and equipment.

Over the last couple of decades Laos has earned a reputation among visitors as a remarkably safe place to travel, with little crime reported and few of the scams so often found in more touristed places such as Vietnam, Cambodia and Thailand. As a visitor, however, you’re an obvious target for thieves (who may include your fellow travellers), so do take necessary precautions.

While tipping has now become an accepted practice in Asian countries, it should always be considered a gesture of appreciation for good service and not an obligation. Tipping is now coomonplace in Laos especially in the service industry and you should be prepared to tip guides, drivers, porters and those who assist you during your stay.