Situated in the southwest of the Indochinese peninsula, Cambodia remained hidden from the outside world for much of the last century. Now emerging from years of isolation, the country has come back to show the whole world its beauty and mystery and offers a true taste of Southeast Asia. Representing the glorious Khmer civilization and one of the most spectacular historical sites in Asia, the remains of this empire can be seen at the fabled temples ruins of Angkor and monuments unrivalled in scale and grandeur in South East Asia. In addition to the famous ruins of the Angkor dynasty, Cambodia is home to a wealth of exceptional off the beaten path locations. A southern coastline flaunting stunning beaches, scenic cruises along the Mekong and voyages onto Asia’s largest freshwater lake, Tonle Sap, add several other dimensions to the Cambodia tour experience.

Explore Cambodia's rich culture, from the captivating temples of Angkor in Siem Reap to the National Museum and Royal Palace in the capital. Moving out of the cities enjoy luscious countryside and authentic home-stays, Cambodia will steal your heart and enrich your spirit with culturally immersive vacation. 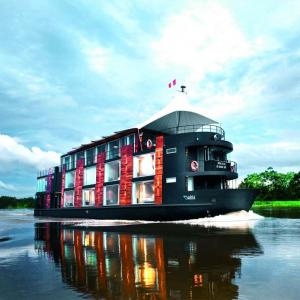 Mekong Cruise Experience
10 DAYS / 9 NIGHTS
On Request
This is a Cambodia and Vietnam experience with a truly different perspective – from the waters of the mighty Mekong River. Sail for eight days aboard a classic riverboat from Siem Reap to Ho Chi Minh City.
VIEW TOUR 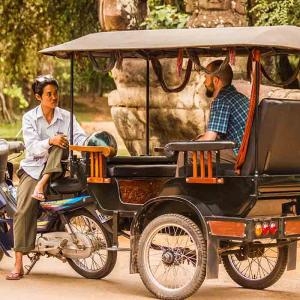 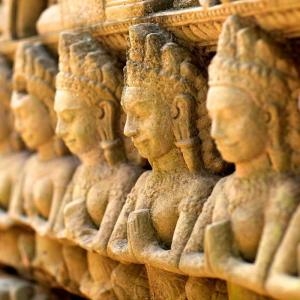 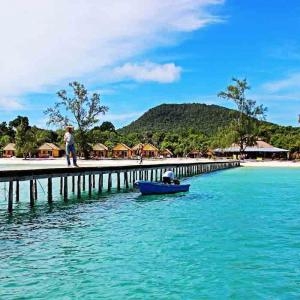 Angkor served as the capital of the Khmer Empire from the 9th to the 14th centuries. As such, it is filled with historic treasures, making it one of the most significant archaeological sites in Southeast Asia. Ruins of a thousand temples can be found scattered over farm lands and rice fields. These include the famous Angkor Wat temple, the world’s largest single religious monument, the Bayon temple at Angkor Thom with its multitude of massive stone faces and Ta Prohm, a Buddhist temple ruin entwined with towering trees. Many of the temples at Angkor have been restored, making the huge palace one of the wonders of the ancient world while offering an outstanding look of Khmer history.

Phnom Penh, the largest city in Cambodia, has been its capital since French colonial days. Once known as “the pearl of Asia,” Phnom Penh is considered one of the prettiest of the cities the French built in Indochina though the city is still recovering from war and revolution. French influence can still be found today. Located on the Mekong River, the city actually dates back to the 15th century. Top attractions include the Royal Palace and the National Museum, which contains a large collection of Khmer artifacts. The night market or Phsar Reatrey is a good place to pick up handcrafted items and souvenirs.

Located between rice paddies and flanking the Siem Reap River, the small provincial capital of Siem Reap serves as the charming gateway to the millennium-old temple ruins of the Khmer Empire, Angkor Wat. The town is actually the result of a conglomeration of several small villages built around several pagodas and subsequently united under the French, and Siem Reap's architecture reflects this influence.

Battambang is Cambodia’s second most populous city, and is especially popular with visitors interested in Cambodian history. Established as a trading center in the 18th century, beautiful Battambang is home to wonderful examples of French-Colonial architecture, ornate temples, peaceful pagodas and scenic villages. The town has many Angkor-style temples and Buddhist shrines. Statues, mostly of animals and gods, can be found in most public places, the most famous of which is an ancient Khmer king that is located on the road to Phnom Penh. The Central Market also is worth a visit.

With several white sandy beaches, clear blue waters, and a national park nearby, Sihanoukville is slowly emerging as one of Southeast Asia’s premier beach destinations. Whether its water sports or relaxing spas that you crave, this sleepy southern Cambodian town has just what you’re looking for. Situated in the center of a small peninsula on the Gulf of Thailand, Sihanoukville town is surrounded by several palm tree-lined beaches and filled with things to do. For the ultimate in relaxation, enjoy a massage at one of the town’s luxury spas and bask in the sun at the private Sokha beach. Or, spend the day doing watersports before hitting the lively bar-lined Ochetuel beach at night. Nearby are several uninhabited islands which are easily accessable from Sihanoukville.

Kampong Cham is the capital of the province of the same name and the third largest city in Cambodia. The town itself is quaint and charming with its bustling morning river scene and wide boulevard streets beside the river. Kampong Cham is a mix of the old and the new, with a new temple being built in and around old ruins and the big ferry boats taking people and goods to the other side of the Mekong, right next to the construction of the first bridge ever built here.

Located on a river not too far from the Gulf of Thailand, Kampot is more famous for its peppers than for tourists, though it is gaining more tourists all the time. Kampot’s black peppercorns are famous with gourmet cooks around the world because of their unique flavor. Kampot is the gateway to Bokor National Park, famed for its abandoned French hill station, pleasant climate and lush primary rainforest. Kampot also offers visitors the opportunity to go boating and rafting on the river that winds through town, as well as take in scenic waterfalls along the route.

Kratie is a small town located on the banks of the Mekong River and is dominated by a central marketplace surrounded by old, French colonial buildings. As a home to rare river-dwelling dolphins, amber sunsets and a gorgeous riverfront, Kratie may be small in size but is still a great spot to stop and get away from it all for a few days. 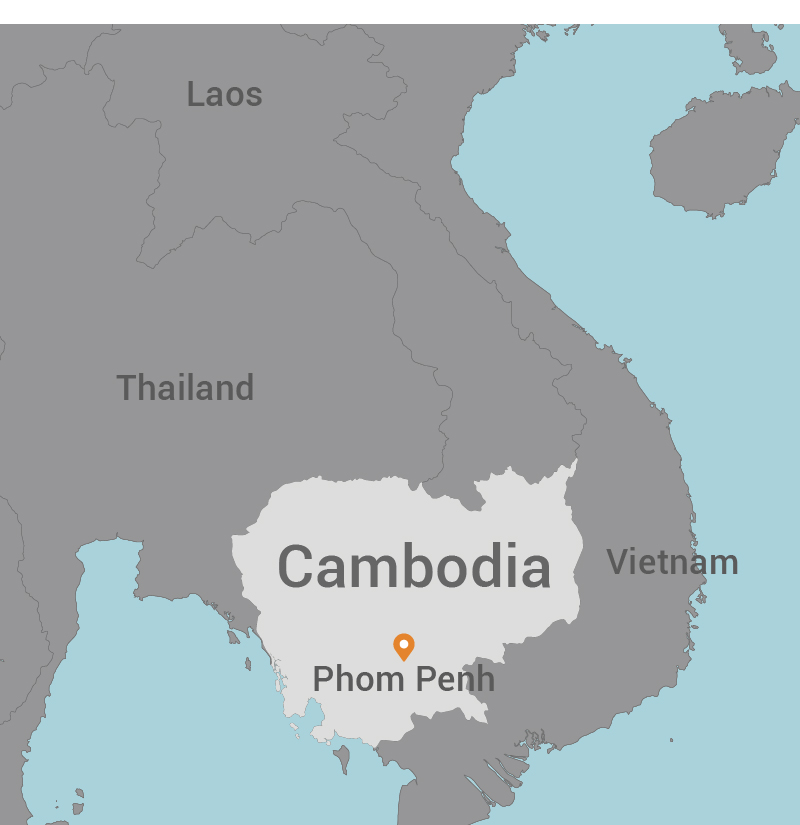 Any time of the year is a good time to travel in Cambodia, with each season having its advantages. The climate in Cambodia is generally hot and humid throughout the year.

The official Cambodian language, called Khmer, is part of the Mon-Khmer family, enriched by the Indian Bali and Sanskrit languages and influenced by Thai and French.

Khmer cuisine is similar to that of its Southeast Asian neighbors. It shares many similarities with Thai cuisine, Vietnamese cuisine and Chinese cuisine. Cambodian cuisine derives its flavor from spices and aromatic herbs, with little use of fat and meats. This cuisine is a combination of complex, vibrant flavors and a delicate balance between saltiness, sweetness, sourness and bitterness.

Cambodia has a wealth of traditional and international festivals. Most of these are a time of great rejoicing for the predominantly rural populace, many of whom flock to the capital to join in the celebrations and witness the organized fireworks displays which accompany the festivals.

The official currency is the Cambodian Riel.

There are two international airports in Cambodia: Phnom Penh International Airport located 20 minutes from the town centre and Siem Reap airport, 7 km from the heart of the town.

Visas are required to enter Cambodia. Visitors may obtain visas in advance at any Cambodian embassy or consulate or e-visa via online website or upon arrival at Cambodian airports and border crossing points.

Cambodia has a wide range of souvenirs – colourful cotton and silk fabrics, wood and stone carvings, lacquerware, jewellery and much more.

Health issues (and the quality of medical facilities) vary enormously depending on where you are in Cambodia. The major cities are generally not high risk and have good facilities, though rural areas are another matter. We strongly recommend having a good health insurance and carrying a good first aid kit. The following advice is a general guide only.

Despite being one of the poorest nations on Earth, Cambodia is a relatively safe country with stable politics and a peaceful population. However, travelers should remain knowledgeable and understand all security threats before their arrival. The Kingdom isn’t dangerous, as long as you follow sensible precautions and stay alert.

A tip, or gratuity, is defined as a gift of money given to someone for performing a service or menial task, over and above the payment due for the service. Tips, which are not required in all countries, are expected in some denomination for good service from those in the industries where tipping is expected.