Being situated a mere 50 km east of Hai Phong city in the north of Vietnam, Cat Ba Island is part of a chain of 366 islands that lie within the larger area of Halong Bay and is the largest island in Halong Bay with almost 300km². If Halong Bay is famous for one of the World Heritages, Cat Ba Island is a national park of Vietnam. The island was honorably recognized by UNESCO in 2005 as a Biosphere reserve of the world and is easily accessible and matches neighbouring Halong Bay and Bai Tu Long Bay for stunning natural beauty. Cat Ba is known for its rugged limestone mountains, hot and cold springs, moist tropical forests, mangrove forest, coral reefs as well as its deserted beaches, and casual island lifestyle. It also offers visitors the added options of relaxation, adventure and cultural exchange. 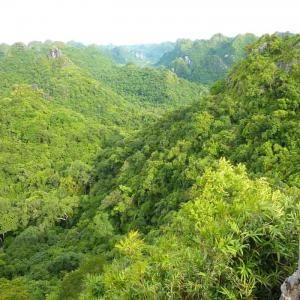 This trip offer you all in one with  the good sense of combination of physical activities and relaxing time while experiencing off beaten route cruising and kayaking in Lan Ha bay and Cat Ba National Park. You’ll visit the farming village and enjoy sweeping views over Halong Bay; ride a bike through Viet Hai village; and take a boat past the floating villages in Lan Ha Bay, where you can kayak and swim at pristine beaches. Your guide helps you interact with the locals and keeps an eye out for various animals you might see in the forest.

Rugged, craggy and jungle-clad Cat Ba, the largest island in Halong Bay, has experienced a tourism surge in recent years. The central hub of Cat Ba Town is now framed by a chain of low-rise concrete hotels along its once-lovely bay, but the rest of the island is largely untouched and as wild as ever. With idyllic Lan Ha Bay just offshore you'll soon overlook Cat Ba Town's overdevelopment.

Cat Ba is a pretty laid-back place most of the year and for climbers, kayakers and hikers it's the launching pad for a swag of sweat-inducing activities. Between June and early August (and particularly on summer weekends) the energy level gets dialled up significantly as Cat Ba Town transforms into a roaring resort, filled with vacationing Vietnamese. This is peak season and hotel prices during this period can rocket.

Almost half of Cat Ba Island (with a total area of 354 sq km) and 90 sq km of the adjacent waters were declared a national park in 1986 to protect the island’s diverse ecosystems. Most of the coastline consists of rocky cliffs, but there are some sandy beaches and tiny fishing villages hidden away in small coves.

Lakes, waterfalls and grottoes dot the spectacular limestone hills, the highest rising 331m above sea level. The island’s largest body of water is Ech Lake (3 hectares). Almost all of the surface streams are seasonal. Most of the island’s rainwater flows into caves and follows underground streams to the sea, creating a shortage of fresh water during the dry season.