With charming landscape of mountain and sea and the coast dotted with blue water, yellow sand beaches that sparkle under forests of green willow trees like Nhat Le and Da Nhay, Quang Binh attracts thousands tourists coming to visit every year. Moreover, located at the north of the majestic Truong Son range in central, Quang Binh province is one of the world's two largest limestone regions of numerous caves inside the limestone mountain created by the river underground with the length nearly 14.000 meter. Phong Nha - Ke Bang National Park with its system of some 300 caves and grottoes recognized as the World Natural Heritage Site by UNESCO in 2003 and Son Doong cave, a relatively recently discovered cave in the national park which is regarded as the largest cave in the world are the two most outstanding highlights that can not be missed of Quang Binh. 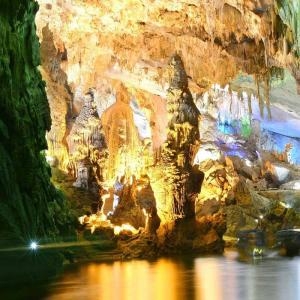 Phong Nha Caves are a complex of 14 grottoes situated in a region of Limestone Mountains in Ke Bang National Park. The caves were listed as a World Natural Heritage Site in July of 2003 by Unesco. On the way we visit some of the most famous battlefields in the Vietnam War

Quang Binh is a province in the upper middle region of Vietnam with the variety of famous tourist attractions.

As Quang Binh is both the intersection of many cultural movements and the battle ground of two wars in the 20th century, it has many cultural and historical sites that are worth visiting such as Quang Binh Gate, Dong Hoi fortress, Ho Chi Minh Trail,...

Phong Nha – Ke Bang National Park has been recognized as the World Natural Heritage Site by UNESCO in 2003. Phong Nha - Ke Bang is home to archeological and historical relics, such as an ancient hieroglyphic script of the Cham ethnic minority, King Ham Nghi's base built for the resistance war against French colonialists in the late 19th century, and the Xuan Son ferry station, Ho Chi Minh Trail and Road 20 used during the US resistance war.

Especially, Quang Binh has recently become more popular for its newly discovered Son Doong cave, which is world's largest cave. The name "Son Doong" cave means "mountain river cave", It was created 2-5 million years ago by river water eroding away the limestone underneath the mountain Where the limestone was weak, the ceiling collapsed creating huge skylights.

Besides, with a 116.04 km long coastline, Quang Binh has a stable foundation to develop tourism. With 2 beautiful beaches with blue water, yellow sand  like Nhat Le and Da Nhay, Quang Binh attracts thousands tourists coming to visit every year.

Another the reason is that it is a province where we can find many ethnic groups whose cultures and traditions are extremely diverse and interesting (Viet (Kinh), Bru - Van Kieu, Chut, Tay).